Monsoon is not just a season but also a reason to let you embrace the rain with your arms open. Just the way earth does. I wanted to do the romance with the rain so I decided to visit Koti resorts, Shimla

I wanted to celebrate monsoon in the beautiful hills of Shivalik region. So I decided to go to Shimla. My only concern was I wanted to spend time with me in serenity. When I thought of Shimla I get furious of a concrete jungle. I have been to Shimla twice and both of the time I found it full of traffic and crowd. Which I hate. But at the same time, I did not want to travel for long hours in the mountains.

I was in a dilemma. Then one of my friend Mr. Kumar Samresh suggested me a very nearby destination- Mashobra. I am grateful to him that he showed me something magical within my reach.

I took a train journey from Delhi to Kalka and from Kalka. I planned to get the experience of the legendary toy train ride. The whole idea of my journey was slow and calm. I understand that life doesn’t give us the opportunity to spend more time in the journey but sometimes I just steal it. It’s my way of rejuvenation. When I get bored with the hustle-bustle of my fast pace of life. Running between the flights. I find solace in train journey that to a narrow gauge train ride. It transports me to my childhood. It’s nostalgic. I cherish it like a 6 years old child grabbing a candy bag with all his strength. Woo!!! I’m loving it.

This time I had only a one-way ticket with me. Which was a long-awaited one. I always wanted to go on a trip which should not be planned as always. There should not be a fixed plan. I will go with the wind. Even I did not have a ticket for the toy train. (you need to book it well in advance) but I was determined enough and wanted to try my luck to get a ticket for the general class. And trust me God really do the conspiracy and I got the ticket on Kalka Station.

So my journey gets started from 7:15 am from NDLS. I reached Kalka at 11:30 am & my toy train starts at 12:30 to Shimla. As the journey started and we were getting elevated 1000 mtr by every passing kilometer the view gets drastically changed. The mountains of Shivalik, pine forest and the iconic arc bridges build by the British were just amazing.

I have experienced many other toy train rides like Darjeeling toy train, Kangda toy train, Nilgiri mountain rail but Kalka Shimla toy train is best of them all.

This train started during the time of Lord Curzon in November 1903.  This rail route features in the Guinness Book of World Records.

This track has so many curves, sometimes at angles as sharp as 48 degrees.
It passes through 103 tunnels and across more than 800 bridges and viaducts.

By 6 pm it reaches Shimla. Here I would like to mention that do not forget to get down at Barog station and have tea. It’s kind of a ritual. Every passenger does that. The architecture of the station was mesmerizing. It looks like a set of an old movie.

The journey was full of scenic views and rain was adding to it more, clouds were playing with the mountains.

I was quite happy that my taxi was just bypassing the Shimla town and getting into the deep forest. It took me just 30-40 minutes to reach Koti resort. It was just 17 km away from Shimla. It was situated on the top of a hill and surrounded by the lush green hill valley.

Here I forget to tell you if you will visit in monsoon you will get a surprise gift in this region. This is harvest season for apples. I visited Himachal Pradesh several times but never had an opportunity to see rip apple on the trees. So this was an added advantage. Koti resorts itself has a small apple orchid. Infect it is built in the middle of apple orchid.

Although, I had no fixed plans for me but I couldn’t stop myself to decide to visit Regional Horticultural Research Station in the middle of the rains. It was on the walking distance to Koti resorts.

The station is located at a distance of 16 kms from Shimla on Shimla- Tattapani- Mandi road. It is situated at 31.1o N latitude and 77.1o E longitude, North West of Shimla with an elevation of 2286 meters above mean sea level. RHRS has been honoured to welcome the visits of three Presidents of India namely; His Excellency Dr Rajendra Prasad, Shri V.V. Giri and Shri R. Venketraman and first Prime Minister of country Pt. Jawahar Lal Nehru besides several Governors, Union Ministers, Chief Ministers and Ministers of different states. In addition, foreign dignitaries particularly scientists, professors, eminent persons, farmers of all the states and tourists all over the world visit station to see fruits and flowers every year.

I got an opportunity to meet senior scientist Dr. Usha. She described it very well:

“Regional Horticultural Research Station is the main research station on temperate fruits since its start in 1953 under the department of agriculture and later named as Regional Fruit Research Station in 1958 and is playing an important role in research and transfer of technology on temperate horticulture. This station was inherited from an apple orchard planted by Mr. Alexander Coutts, a tailor to the then Viceroy of India Lord Dufferin who originally planted the orchard known as “Hillock’s Head” in the year 1887 where apple, pear, plum and a number of exotic ornamental plants including many varieties of roses were planted. Later on, it was named as ‘Coutt’s Garden’, where some of the famous English varieties of apple such as Yellow Newton, King of Pippin and Granny Smith were also introduced. Since December 1, 1985 it is a leading Regional Horticultural Research Station of Dr Y S Parmar University of Horticulture and forestry, Nauni, Solan (HP) and centre of excellence for sustainable apple production.”

It is true that most nature resorts in and around Shimla boast of scenic beauty and treasures of mother nature, the Koti Resort is much more than that. It is an experience! It is a perfect choice for magical weekend getaways, feasts, celebrations, and conferences for folks in Delhi.

Here is the highlight of my stay:

I stayed in the premium room and loved it to bits! I’d really like to go back and stay in the same room again because of the view of the room. It opens up in the valley. And monsoon clouds kept me engaging throughout my stay as sometimes they were dancing, flowing from the top or just covering the valley with white snowy fur.

The rooms at Koti Resorts are luxurious, and everything is grand and vintage and just plain amazing.

Exploring the resort is great fun. There is apple orchid that will appear suddenly as you walk down a narrow stairway, there are brilliant viewpoints that spring up on you just as you are finding your way to the dinner/lunch venue – they change it every day and it makes the walk even more interesting.

Food was delicious and the staff was very friendly.

This will not be your average luxury hotel room stay experience, this is much more than that and will leave you wanting to come back for more. God knows how much I’m wanting to stay there again! 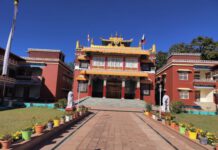 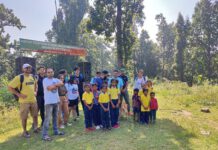 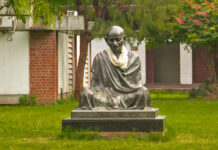