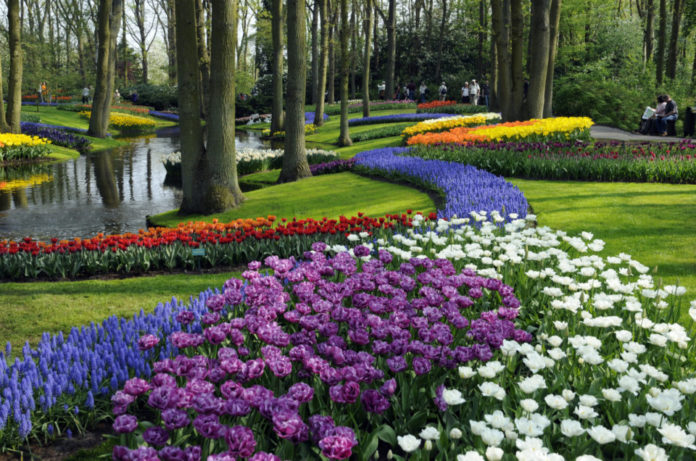 When it comes to visit Europe in the summers the first name pops up in my mind is-Holland. Holland is known for its rich Dutch culture, tulips & windmills. What else a nature lover wants? How many of you knows that there is a famous garden of tulips being prepared for months to welcome spring with the huge verity of tulips. This gardens is–Keukenhof tulip garden. A huge number of Dutch gardeners works day & night to cultivate more than thousand species of tulip flowers for months. The garden is just 35 kilometers from Amsterdam & 21 kilometers from Schiphol airport. It’s located just south of Haarlem. 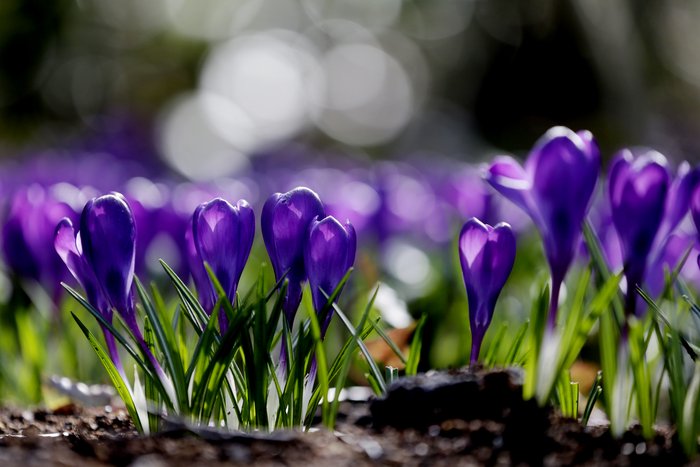 Tulip is the distinctive symbol of Holland, you will find it everywhere. The saga of the tulips is very interesting. It’s hard to believe that it’s not an inborn crop of Holland but originally cultivated in the Ottoman Empire (present-day Turkey), tulips were imported into Holland in the sixteenth century. The Tulip were originally a wild flower growing in the Central Asia and were first cultivated by the Turks in 1,000 AD. The tulip travelled far before arriving in the Netherlands. Tulips were originally found in the Tian Shan mountain region of the north-western Himalaya. Dozens of different types in all kinds of colours still grow there each spring. In the 11th Century the Seljuks, who lived there at that time, took the tulip with them to Turkey, where they drove out the Byzantines. The tulip became a cherished flower in Turkish culture, and is still so today. Sultans organised tulip parties each spring. And the most extraordinary tulips were illustrated in beautiful books. Tulips were also depicted on tiles and other household objects. 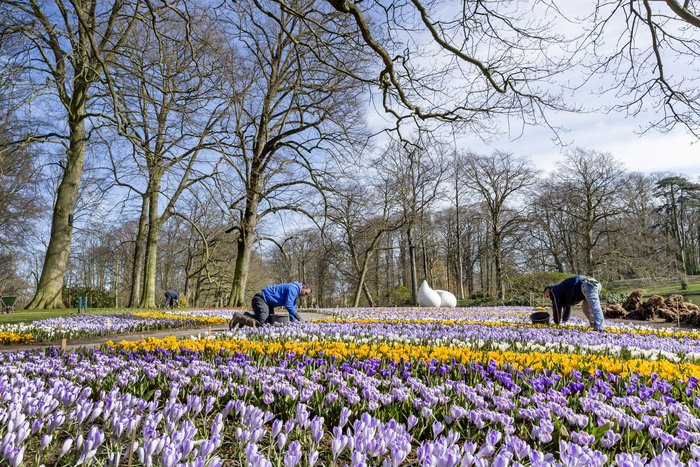 But these curvaceous flowers had got the patronage of Dutch dynasty & the immense love from the people of Holland & soon become a native crop of Holland. It is so popular here & become the eternal part of Dutch culture. There was a time when the weight of a bulb of tulip was worth of gold, and it was as precious as currency. People used to steal it from gardens. Decorating home with tulips was a status symbol. 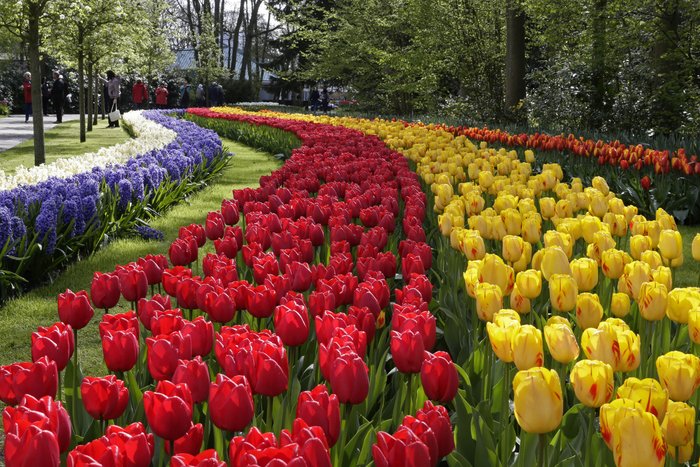 Dutch loves being called their country-the flower shop of the world. As the dark & dull days of winters passes by the landscape of country side of Holland gets changed drastically. All of a sudden it becomes a sea of colors, full of blooms.  In the Kop van Noord-Holland, you will find millions of tulips & other flower covered fields.

The history of Keukenhof

Keukenhof started as an initiative on the part of ten flower bulb growers and exporters who create a showcase for the flower industry. In 1949, they opted for an ideal location: the gardens around Keukenhof castle.

For many years, Jacoba van Beieren was the hostess of Keukenhof. In the 15th century, she was the owner of the land where Keukenhof is now located. At that time the area was still a piece of untouched nature, used only for hunting and to gather herbs for the castle’s kitchen, which is where the name Keukenhof originally comes from. 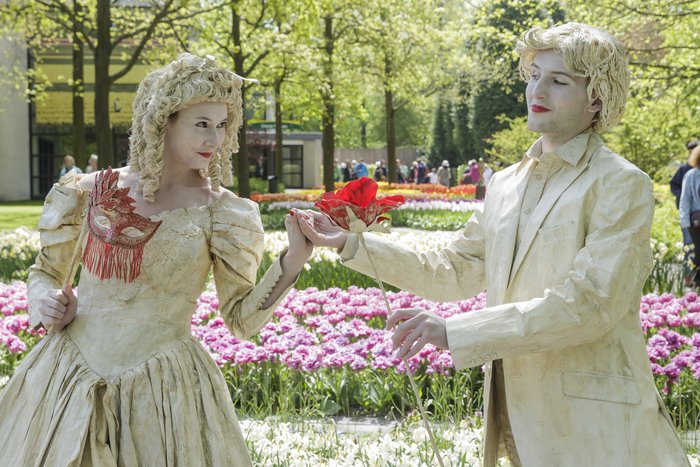 Countess Jacoba van Beieren was born in 1401 and died in 1436. During the period from 1417 to 1433, she ruled Holland, Zeeland and Henegouwen. ‘Never a dull moment’ is perhaps the best summary of the life of this somewhat tempestuous woman, who married four times, spent a couple of years in prison, and lived in exile for some time in England. One of her favourite pastimes seems to have been waging war – she was even willing to go to war with former husbands. In 1433 she was forced to abdicate from all of her Counties. She withdrew from public life and, at the age of just 35, she died of tuberculosis in Castle Teylingen, not far from Keukenhof. 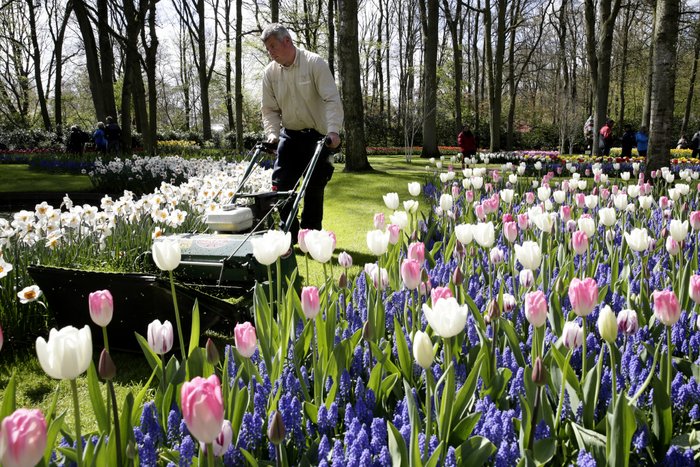 Following the death of the Countess Jacoba van Beieren in 1436, the large estate passed through the hands of several wealthy merchant families, including Baron and Baroness Van Pallandt. They asked the landscape architects Zocher, who were also responsible for the Vondelpark in Amsterdam and the gardens of Soestdijk Palace, to design a garden around their castle. The English landscape garden they created in 1857 still forms the basis for the Keukenhof Park of today.

The windmill at Keukenhof is more than a century old. It was built in Groningen in 1892, and was used to pump water out of a polder. In 1957, the Holland-America Line bought the mill and donated it to Keukenhof. 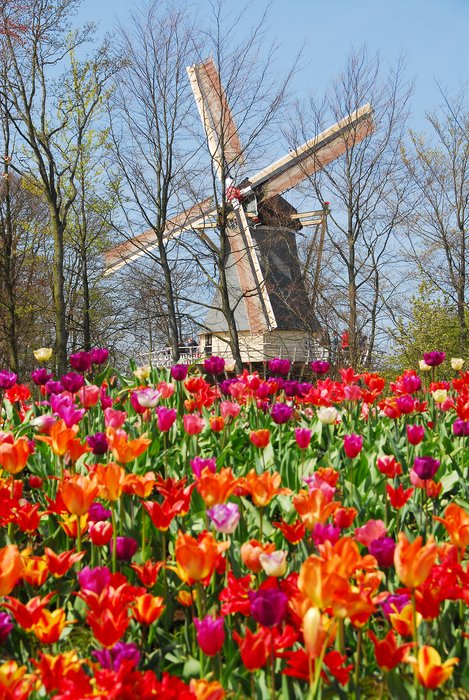 Facts and figures about Keukenhof 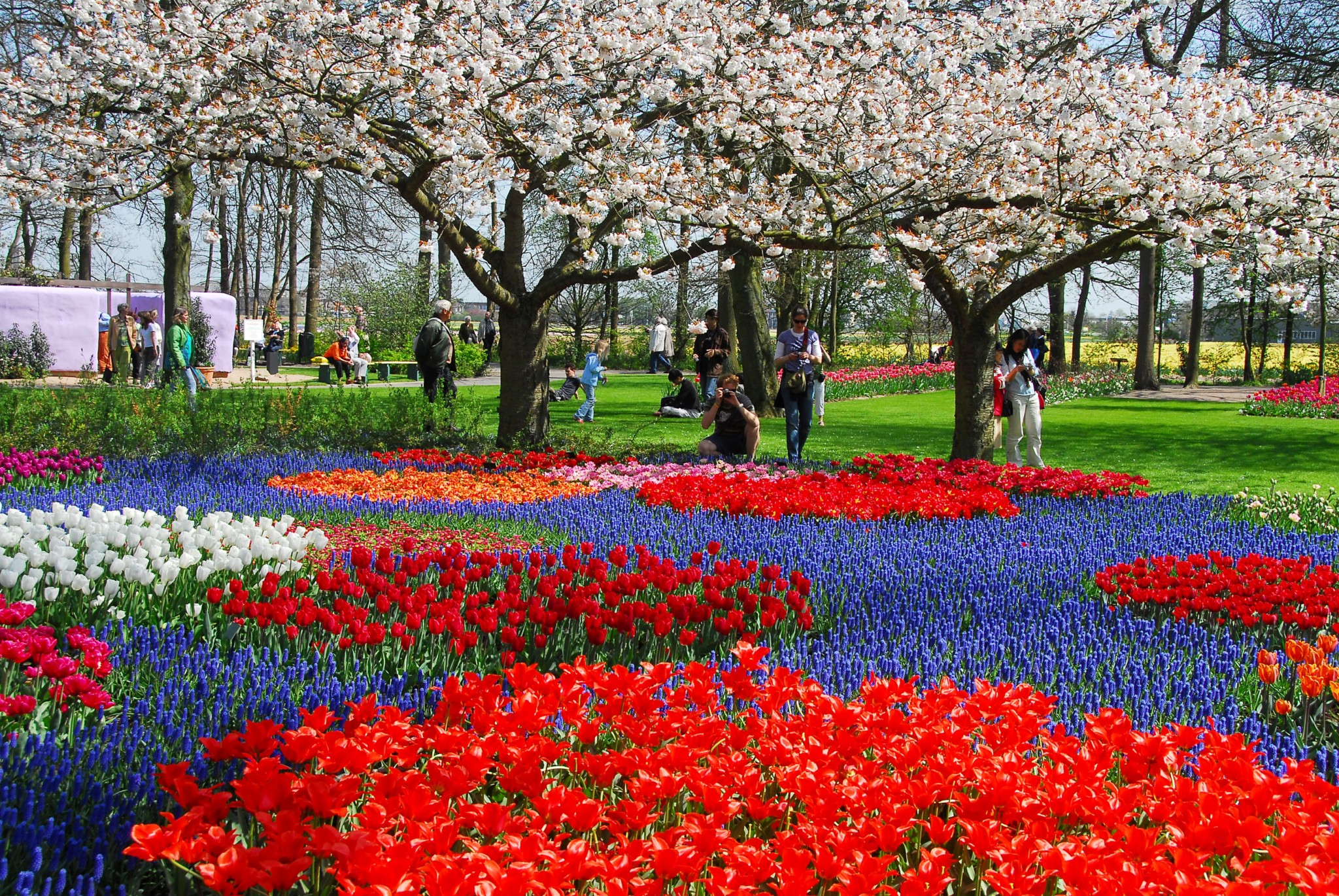 Keukenhof originally focused almost exclusively on flower bulbs, but now has much more to offer. The historic park, which dates from 1857 and was designed in the English landscape garden style by Zocher, forms the perfect backdrop for the flower bulbs. Visitors can become acquainted with cut flowers, plants and tree nursery products.

Each year, fourty gardeners plant bulbs at reserved locations throughout the park. At the end of the season, these bulbs are harvested, and a new cycle of planting, blooming and harvesting begins again in the autumn. 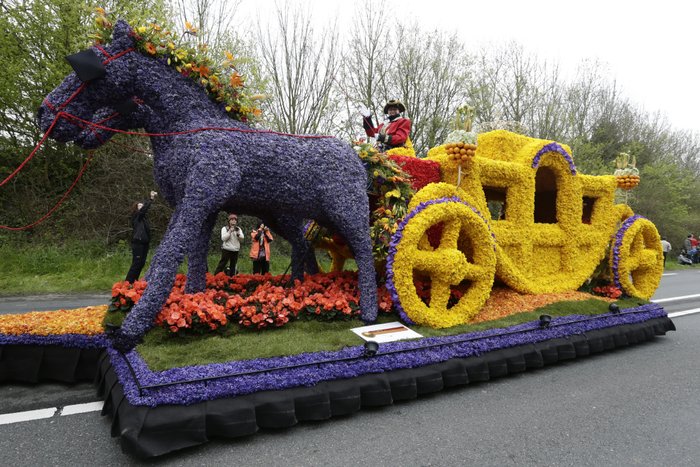 In order to ensure that Keukenhof always has a new look, the planting is redesigned every year. The plants are carefully selected so that visitors can enjoy bulbs in full bloom throughout the entire period Keukenhof is open. The seven million flower bulbs are supplied completely free of charge by a hundred exhibitors who could hardly imagine a better showcase for their products. 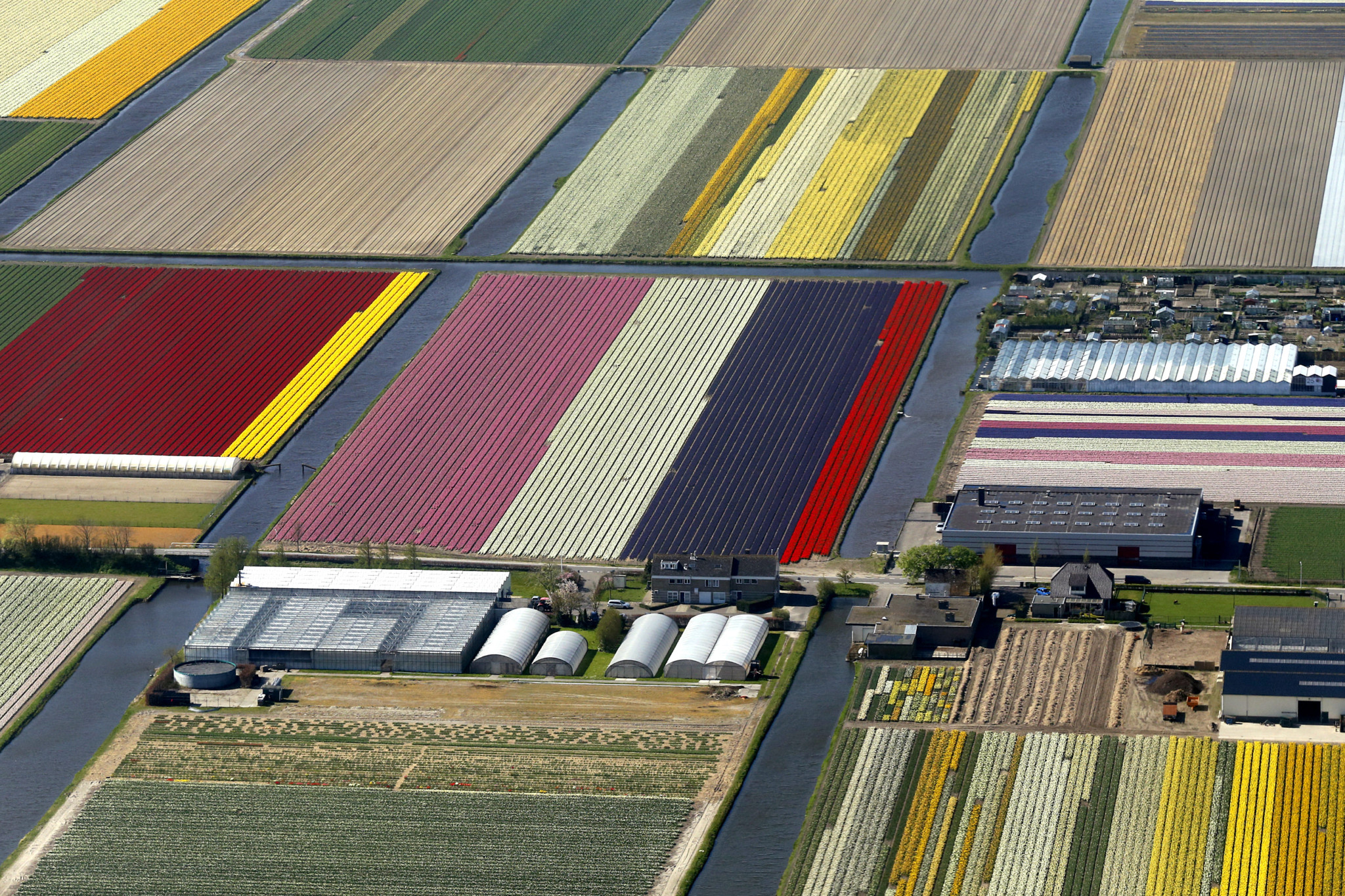 Keukenhof inspires its visitors with a range of different styles of gardens and interiors, in which flower bulbs and bulb flowers always play a key role. The different parts of the park vary from the English landscape garden to the renovated Japanese country garden. The garden offers surprising perspectives and exciting vistas and brings out the very best of the ancient trees. In the natural garden, shrubs and perennials are combined with naturalised bulbs. The historic garden is home to old varieties of tulip and uses these special varieties to demonstrate the tulip’s long journey prior to its arrival in the Netherlands.

The seven inspirational gardens give visitors the unique opportunity to gain ideas for their own gardens.

The park organize many events like flower shows, parade & auctions. You can enjoy live music & performance by Local Dutch artists in the partk.

For children, Keukenhof has a maze, a playground, a Miffy house and a petting zoo. A treasure hunt takes them along the most beautiful places in the park.

Keukenhof has its own sculpture garden. A network of artists will be exhibiting around 100 pieces. The art exhibition is characterised by a wide variety of styles. It has two full-fledged restaurant and many food points inside the part. If you feel tiered you can sit & relax over the cup of coffee & special Dutch wafers.

Keukenhof is located between Amsterdam and The Hague and is easily accessible via motorways A4 (exit Nieuw-Vennep) and A44 (exit 3, Lisse). ‘Keukenhof’ is well signposted after the exit.

It’s very easy to use public transport to reach Keukenhof Tulip garden. You can find dedicated busses outside Amsterdam Airport Schiphol to reach Keukenhof. It takes 35 to 40-minute to reach there. You can buy a combo tickets (bus & garden entrance) from the Amsterdam Tourist Information Offices (called “VVV” offices) for Bus 58 from Schiphol direct to the gardens. The buses leave every 15 minutes from the second island outside the arrivals-level entrance at the airport. See the Keukenhof website for more information. 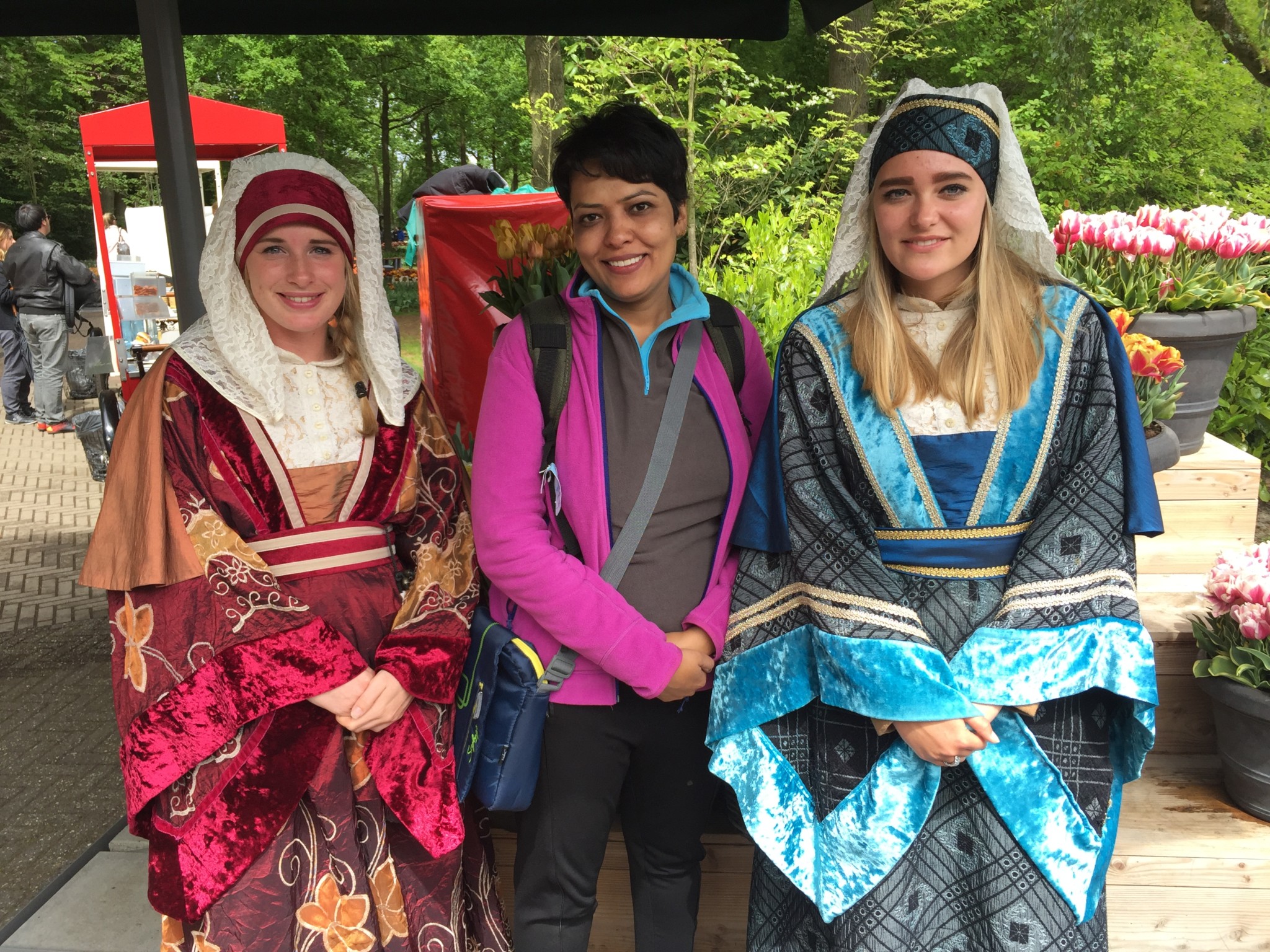 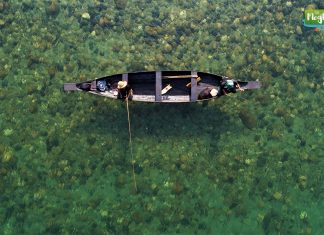